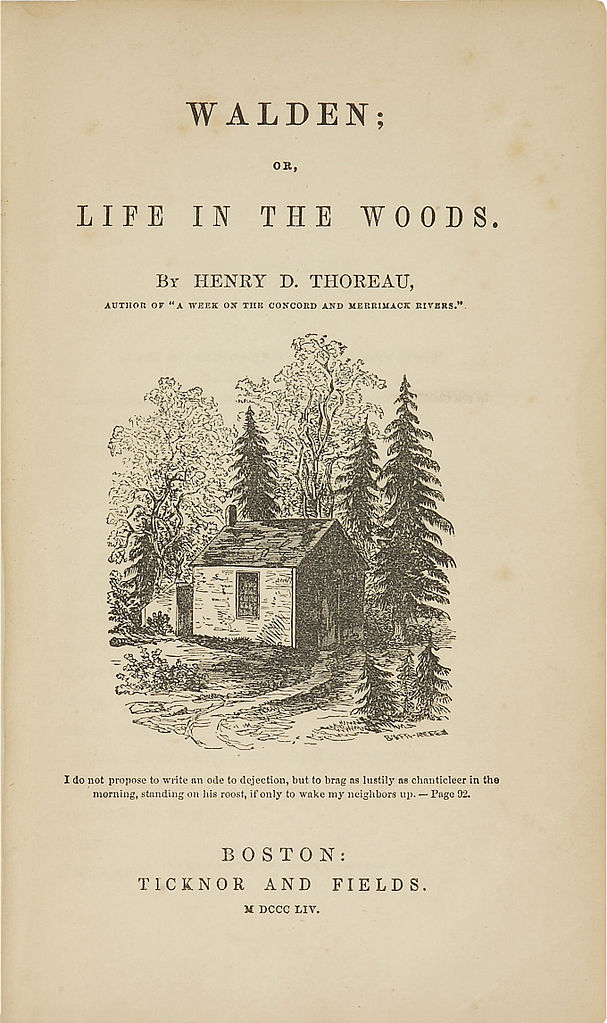 When I was younger, perhaps purer, but certainly more impressionable, I read Henry David Thoreau’s Walden. What I read deeply stirred me, particularly Thoreau’s reasons for retreating to the woods. “I went to the woods,” he wrote, “because I wanted to live deliberately, to front only the essential facts of life, and see if I could not learn what it had to teach, and not, when I came to die, discover that I had not lived.” Thoreau said he “wanted to live deep and suck out all the marrow of life, to live so sturdily and Spartan-like as to put to rout all that was not life, to cut a broad swath and shave close, to drive life into a corner, and reduce it to its lowest terms.” Though I could not fully articulate what it meant to “reduce life to its lowest terms,” I knew it was something I wanted to do. I wanted my small house on Walden Pond. I longed to hoe my patch of beans.

Though a sensualist, I have always been attracted at least to the idea of simplicity. Thoreau thus bespoke my soul with his quest for “life” – by which he meant earthly life; the life which is the “liquid fire” of growing things, the shimmering, crystalline purity of water, the bellowing might of Ocean, the teeming, but silent, fecundity of soil, the driving impetus of autumnal winds. In the waste of our own lives, in the hurry and bustle of the world of men, we miss Life, said Thoreau. “We live meanly, like ants; though the fable tells us that we were long ago changed into men, it is error upon error, and clout upon clout, and our best virtue has for its occasion a superfluous and evitable wretchedness.”

It was my (secret) approval of Thoreau’ castigation of religion that gave me pause. I knew the words were, at least, near-blasphemous, but I gladly grudged the truth of  “most men” are “in a strange uncertainty” whether life is “of the devil or of God.” Such men, said Thoreau, have “somewhat hastily concluded that it is the chief end of man here to ‘glorify God and enjoy him forever.’” Like an impure image in the mind, which, though resisted, allures, this indictment of religion drew me even while I threw up every defense to impede it. END_OF_DOCUMENT_TOKEN_TO_BE_REPLACED

This year our family did not celebrate Thanksgiving. Why?

It was not to protest the effects of colonization on Native American peoples, for which, some say, Thanksgiving stands as a symbol. Much less was it out of a spirit of ingratitude toward God for his blessings. Nor was it from an ascetical disgust for feasting and drinking. We Zehnders are no ascetics; it does not take much to lure us to the pleasures of the board and barrel. This year, we in no way eschewed the feasting associated with Thanksgiving; we merely held off on it until the Sunday, which, this year, was the Feast of Christ the King. We even had the traditional turkey, with all the usual side dishes, and apple and pumpkin pie. The wine, beer, and port flowed freely.

But we did not celebrate Thanksgiving.

This was, in fact, the first Thanksgiving we have sat out. In past years, we would gather with family for the day; this year, too, we planned to do the same, until circumstances of a practical nature prevented it. But, when the occasion permitted it; when we had no one else with whom to celebrate the day, when were effectively free to say yea or nay to Thanksgiving, we said nay. Why?

One reason is that I have never quite seen the point of Thanksgiving. I know what it’s supposed to be about –giving thanks to God for all his blessings, but that rationale has long struck me as an excuse for the day, not its real meaning. If Thanksgiving has had anything to do with God, it has been reduced to a curt nod to the Big Guy, soon to be forgotten in the fevered amnesia of the Holiday Buying Season. It seems no accident that Black Friday follows Thanksgiving Thursday – and now Cyber Monday, only two days later. END_OF_DOCUMENT_TOKEN_TO_BE_REPLACED