What follows comes from my book, Light to the Nations II: The Making of the Modern World. For more information on this book, please visit the site of the Catholic Textbook Project. 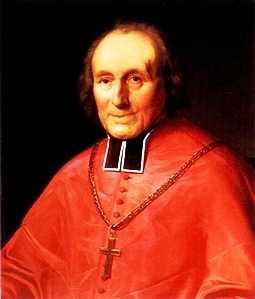 It was silent night, November 20, 1837. By order of the Prussian king, Friedrich Wilhelm III, troops surrounded the archiepiscopal palace in Köln, on the lower Rhine in Germany. Escorted by police, the governor of the province entered the palace and arrested the 64-year-old archbishop, Clemens August von Droste-Vischering. After being taken from his diocese, the archbishop was imprisoned at the fortress of Minden, about 147 miles northeast of Köln. Such was the price Clemens August had to pay for defending the rights of the Church against the Prussian government.

Archbishop Droste-Vischering had insisted that children of mixed marriages (between Catholics and Protestants) had to be raised Catholic. The Prussians, who had taken control of the very Catholic Rhineland in 1815, insisted that in such marriages some children had to be raised Catholic and others, Protestant. This had been the custom in Prussia. The Catholic Church in the Rhineland, said the Prussians, also had to go along with this custom. But, no matter how long-standing the custom was, it violated the law of the Catholic Church—and in a contest between the king and the Church, Archbishop Droste-Vischering knew whom he had to obey.

The imprisonment of Archbishop Droste-Vischering was an inspiration to many German Catholics. It even influenced one young nobleman to change his career plans. The 26-year-old Baron Wilhelm Emmanuel von Ketteler had been preparing to enter the service of the Prussian government; but with the archbishop’s arrest and imprisonment, Ketteler decided he could not serve a government that committed such injustices. Instead, he ended up studying theology; and in 1844, he was ordained a priest.